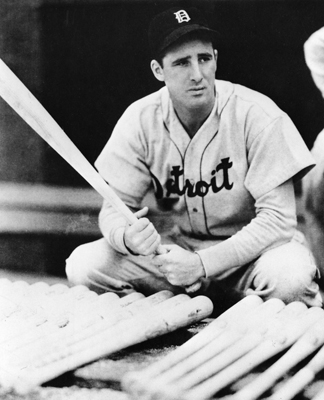 Today, I am presenting the list of top ten first basemen in Tigers history.  Other installments in this series can be found at the following links.

I will start by looking at the Baseball-Reference.com Wins Above Replacement (WAR) leader board for Tigers first basemen:

Based on this list, it appears to be a close race for #1 between Greenberg, Cash and Cabrera.  However, it must be remembered that Greenberg was one of the first players to enter the military during World War II and missed four and a half seasons.  If we assume that “Hammerin’ Hank” accumulated five WAR per year (a conservative estimate given his performance before and one year after the war), then that would bring him up to 79 WAR.

First base is an offense oriented position, so I am also going to look at Adjusted Batting Runs, which  just looks at a player’s offensive contribution.  Batting Runs were first introduced in the Hidden Game of Baseball by John Thorn and Pete Palmer in 1984.

From examination of thousands of games, it has been determined that the average single contributes 0.47 runs.  In other words, if one single is added to a team’s hit total in each game for 100 games, that team would be expected to add 47 runs to their season total.  The values for other events can be interpreted similarly.  The weights are inserted into a formula to calculate batting runs (BR):

In the above formula, outs are equal to at bats minus hits.  The constant before outs (.28 in this example) is chosen so that the league average for BR is zero.  It is generally between 0.25 and .30.

Note that there is not a standard set of linear weights for events.  They vary slightly by analyst and by year, but different weights don’t usually yield radically different results.

Using this measure, Greenberg still has a narrow lead and he also played 275 more games with the Tigers than than Cabrera.

By this measure, Greenberg is back to number one on this list.  In the end, Cabrera and Greenberg are very close statistically for the time they played, but Greenberg gets the nod due to the substantial time missed due to military service.  The complete top ten is shown below.

4. Rudy York 1934-1945  32 WAR  175 ABR  128 OPS+
On August 4, 1937, the Tigers were stuck in a five game losing streak and suffering from a shortage of healthy players. With all their regular catchers injured, manager Mickey Cochrane decided to try Rudy York, the rookie without a position, as the starting catcher.  He proceeded to hit an amazing 18 homers with 49 RBI for the month.  Some 81 years after his big month of August, Big Rudy still holds the the American League record for most home runs in a month.  York eventually became the regular first baseman in 1940 when Greenberg was moved to left field.  He finished in the top five in home runs eight times and top ten in OPS five times.


5. Cecil Fielder 1990-1996  17 WAR  112 ABR  126 OPS+
In the Bill James Historical Abstract, James said that Cecil Fielder was “A big fat guy who hit home runs for a few years”.  That was a reference to Fielder being overrated, but it was a bit harsh.  He was a productive hitter during those years and his 1990 season was one of the most memorable individual seasons I have seen.  He was signed as a low profile free agent in January, 1990 after returning from a season in Japan.  The big first baseman then surprised the baseball world by posting an OPS+ of 167 and leading the league with 51 home runs and 132 RBI.  He never replicated that season, but he had five more seasons of 30+ home runs including a league leading 44 in 1991.

8. Tony Clark 1995-2001  12 WAR  62 ABR  121 OPS+
Tony Clark was the second overall pick in the 1990 amateur draft and played seven seasons for the Tigers.  He was regarded as a disappointment by many fans due to his advance billing and misfortune of being one of the better hitters on some very bad teams.  He posted an OPS+ of 120 or better five times and hit 30 or more round trippers three times.

Dale Alexander had an usual career which spanned only five years from age 26 to age 30 despite a lifetime .331 batting average including his time with the Red Sox.  The reason for the late start was that he was a terrible fielder.  According to Bill Nowlin at SABR.ORG, there was a very good reason for the abrupt end to his career as well:

Sliding into home plate on Memorial Day, Alexander hurt his leg sliding into home plate. Red Sox trainer Doc Woods used a new deep-heat method to try to reduce pain, decrease inflammation, and thereby speed healing: diathermy. Unfortunately, Woods left the machine on too long (apparently leaving the treatment room and not returning for quite some time) and burned Alexander’s leg. “They’d just barbecued his leg,” said son Steve. Don Alexander reported, “It really sort of atrophied. It really was smaller than the other. Just like it was a burn. Scarring tissue. It was discolored.” He was so badly burned that there was worry he might lose the leg. Fortunately, amputation was never necessary.

10. Prince Fielder 2012-2013  7 WAR 53 ABR  136 OPS+
Cecil’s son Prince Fielder was acquired as a free agent in January, 2012 when Victor Martinez went down with a knee injury that would keep him out the entire 2012 season.  Cabrera shifted to third base, so that Prince could play first base.  Fielder played just two seasons including an outstanding first season where he had 151 OPS+ and 4.7 WAR.