Interim manager Sandy Alomar Jr. tried to pull him after 7⅔ scoreless in a 10-run game, but Bieber — over 110 pitches — refused to depart. The next batter, Willi Castro, lined a three-run homer to put the Tigers on the board.

At that point, Bieber had no choice but to exit. But Castro’s blast didn’t matter Thursday at Comerica Park. Not when the likely AL Cy Young winner with a 1.74 ERA bulldozed past the Tigers with 10 strikeouts.

The Tigers were nearly held scoreless for the second game in a row. On Thursday, it was a 10-3 defeat to the Indians, who improved to 27-23 overall and snapped an eight-game losing skid.

With the loss, Detroit (21-28) is five games behind the Toronto Blue Jays for the AL’s eighth and final playoff spot. The Indians have a half-game lead on the Blue Jays for seventh place.

[ How the Tigers can rejoin playoff hunt with a big weekend ]

After taking a no-hitter into the sixth inning in his Sept. 11 start against the power-hitting Chicago White Sox, Mize seemed ready to put together back-to-back strong outings for the first time in his six-game career.

He gave up a two-out solo homer to Jose Ramirez on an 86.5 mph splitter in the first inning. The pitch never dropped, and Ramirez sent it over the right-field wall for a 1-0 lead on his 28th birthday. Mize responded by taking down the next seven Indians, pushing through the third inning at 41 pitches.

But Cleveland chased him in the top of the fourth. 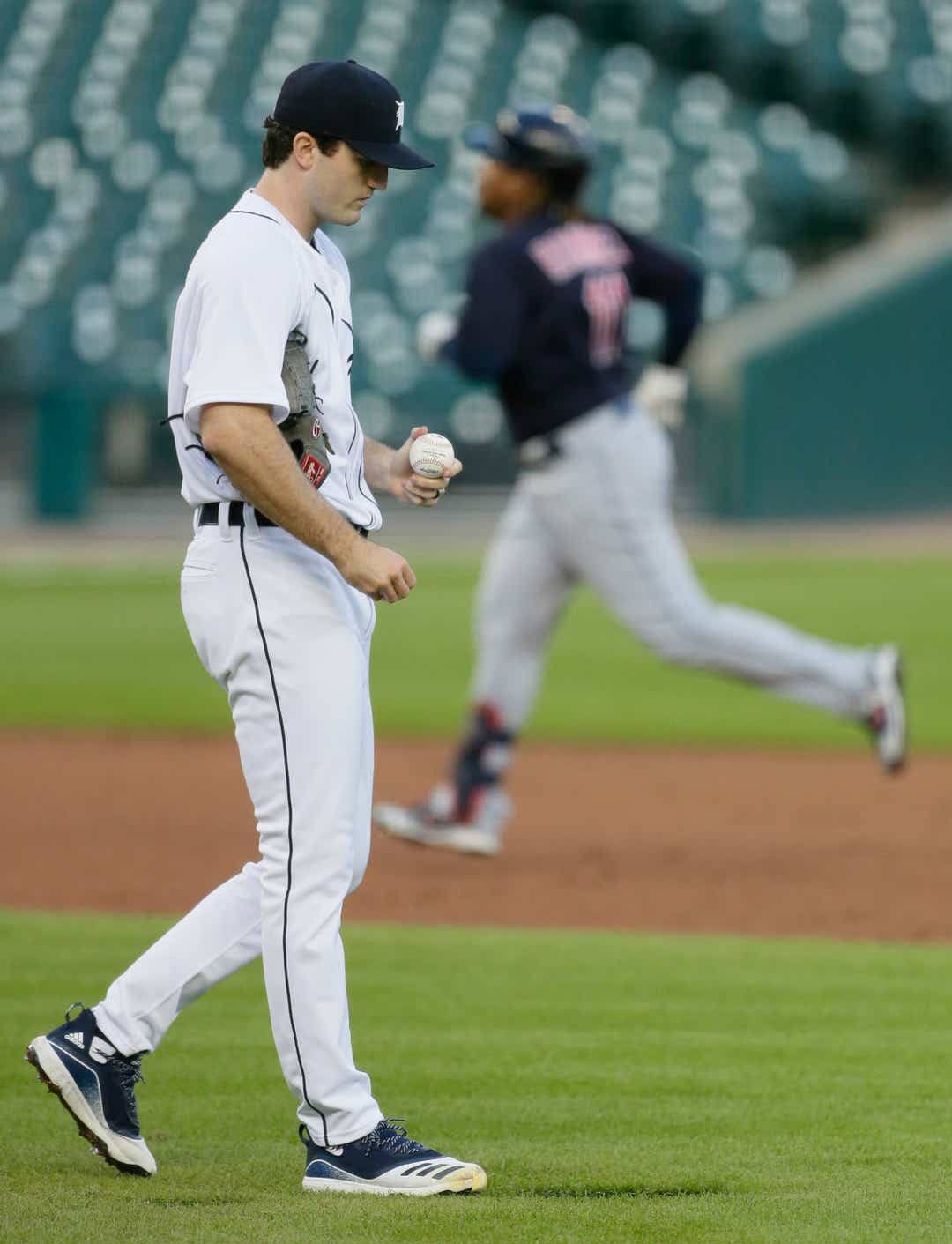 Ramirez crushed his second home run of the game (and his 13th this year) on a 95.1 mph fastball, driving in two runs for a 3-0 lead. Five batters and two outs later, third baseman Isaac Paredes made an error with the bases loaded. He could’ve smoothly fielded a grounder from Oscar Mercado and stepped on third base, but he swiped aggressively at the ball — which bounced off his glove and into foul territory to allow another run and keep the inning alive for the Indians.

Tigers manager Ron Gardenhire pulled Mize after he walked Francisco Lindor with the bases loaded, putting the Tigers in the hole by five runs.

Mize ended with five runs (three earned) on four hits and three walks with one strikeout in 3⅔ innings. More surprising than the rocky start was his lack of offspeed command. Of his 79 pitches, he used 41% sinkers, 25% four-seam fastballs, 16% cutters, 13% splitters and 5% curveballs.

All four of his swinging strikes — and six of eight called strikes — came from his fastball.

Left-hander Nick Ramirez inherited a bases-loaded, two-out jam and wiggled out of it with three pitches — 86.5 mph fastball and repeat 79.2 mph changeups — to get Cesar Hernandez to strikeout swinging.

In each of Ramirez’s two outings since being called up from the alternate training site in Toledo, he allowed two runs in two innings. He took a step forward Thursday with one walk and no hits in 2⅓ innings.

Right-hander Jordan Zimmermann made the second relief appearance in his 12-year career. His last time was Sept. 26, 2016, against the Royals.

On Thursday, he wasn’t much help in the seventh and eighth innings.

Zimmermann gave up five runs on six hits and one walk in 1⅔ innings. He was replaced by Rony Garcia with two outs in the eighth and a runner on first base. His fastball maxed out at 90.8 mph but averaged 88.5 mph. Of his 48 pitches, he tossed 14 two-seamers, 13 four-seamers, eight sliders, seven curveballs and six changeups.

What’s up with Daz?

Gardenhire gave right fielder Daz Cameron a break Wednesday, moving Jorge Bonifacio to right field and having Travis Demeritte play left field. Cameron made his MLB debut Sept. 9 and is now off to a 1-for-27 start.

He delivered in a 4-3 loss to the Chicago White Sox on Sept. 11 with a two-run single, but hasn’t done much else other than strikeout 11 times and walk once. Cameron returned to Thursday’s lineup with a .042 batting average and went 0-for-3 with one strikeout.

Gardenhire diagnosed the problem as simply trying too hard.

“He’s trying so hard to get hits, and that’s probably why he’s not getting hits,” Gardenhire said. “He’s a little worried about it, but this is the big leagues. We face good pitchers.”