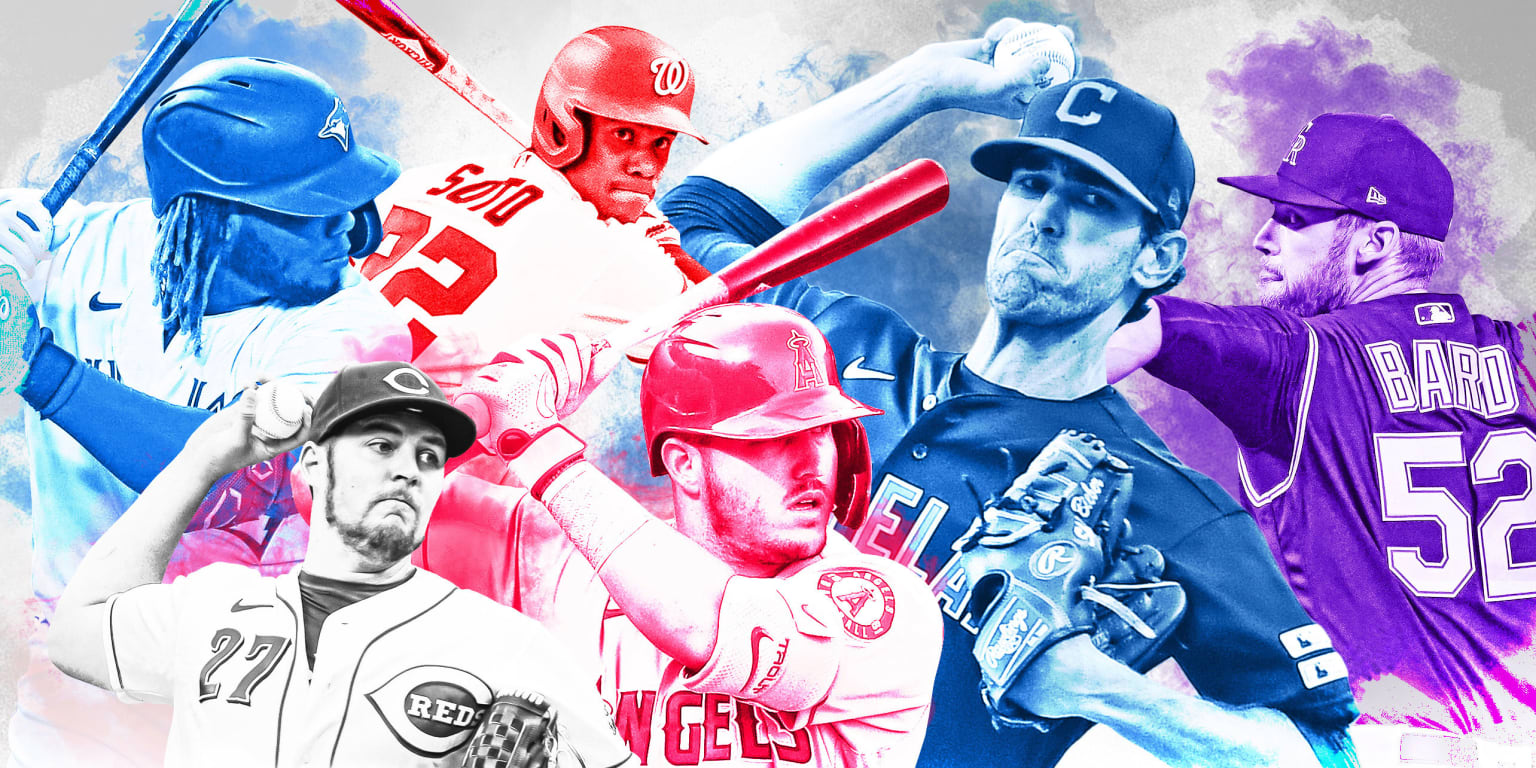 The 2020 baseball season offered us plenty of excitement in a short span, from the July 23 Opening Day matchups all the way through Game 6 of the World Series. Even with fewer games than normal, there were feats and amazing stats accruing left and right, every single day.

It’s hard to pick just one per team, after a season that gave us so much fodder. No team or player can be summed up in one stat alone, but information can entertain and give us insight into the season that was, even if it doesn’t encapsulate the entire year in one fact.

To wrap up the year and get everyone ready for 2021, here’s a look at one amazing stat for each of the 30 teams from this past season.

Blue Jays: We all know the drill with these current Blue Jays — Bo Bichette, Vladimir Guerrero Jr. and Cavan Biggio are all sons of Major Leaguers. On Opening Day last season, they were joined by another Major League son in Travis Shaw. They started in the top four spots in the lineup to start the year, marking the first time those lineup spots were all occupied by sons of Major Leaguers in a game, according to the Elias Sports Bureau.

Orioles: Shortstop José Iglesias had quite the year at the plate. Though he finished about 30 plate appearances shy of qualifying for the batting title, hit .373 average led all players with at least 150 PA. And per Statcast’s metrics, it wasn’t just a fluke. He had a .358 expected batting average, based on quality of contact, which also led all batters with the same minimum.

Rays: Ji-Man Choi authored one of the most fun — and surprising — moments of the regular season on July 26, when the left-handed hitter strode to the plate batting righty instead. In his second such plate appearance that day, he homered. His 861 career PA batting lefty before his righty home run were the most career PA from one side before a homer from the other side among non-switch hitters since Hal Trosky in 1935.

Red Sox: Rookie Bobby Dalbec put together a solid 23-game, 92-PA campaign for the Red Sox, hitting .263 with eight homers and a .600 slugging percentage. In his debut on Aug. 30 he homered, becoming the ninth Red Sox player to do so in his debut and the first since Daniel Nava in 2010. Later, in September, he homered in five straight games, matching a franchise record established by Jimmie Foxx in 1940 and also done by Ted Williams, Dick Stuart, George Scott and José Canseco.

Yankees: The Yankees are the most decorated franchise in baseball history, so it isn’t every day that they check off a team first. But on Sept. 17 they did just that, knocking five home runs in the fourth inning against the Blue Jays, tying an MLB record done six previous times — but never by the Yankees.

Indians: Shane Bieber won AL Cy Young honors unanimously, and he created a plethora of fun facts while he was at it. He struck out at least eight batters in each of his 12 starts in the regular season, tying 1997 Pedro Martínez for the most consecutive starts with at least eight strikeouts to end a season, according to Elias.

Royals: Reliever Josh Staumont had a high-powered 2020, throwing 36 pitches at least 100 mph, third-most in the Majors behind Brusdar Graterol (54) and Garrett Crochet (45). That’s the most 100 mph pitches by a Royals pitcher in a season since 2015, when Kelvin Herrera had 174 and Yordano Ventura threw 52.

Twins: The ageless Nelson Cruz spent time atop the home run leaderboard this year, first sharing the lead entering Aug. 30. Ultimately, he finished tied for seventh, missing a few games due to injury, but his time in the lead was historic. He became the first 40-year-old to have a share of the MLB lead in homers at least five home runs into the year since Hank Sauer in April 1958, according to Elias.

White Sox: The best way to ensure you were going to lose to the White Sox last year? Start a left-handed pitcher against them. The team finished the regular season 14-0 in games against left-handed starting pitchers, becoming the first team since the mound was moved to its current distance in 1893 to go undefeated in games against lefty starters, according to Elias. The prior best winning percentage in such games was .889, by the Brooklyn Bridegrooms in 1895. They went 8-1.

Angels: Stop us if you’ve heard this before: Trout finished in the top five for AL MVP. He was actually fifth, his lowest finish since he was called up for good in 2012. That’s nine straight seasons with a top-five MVP finish for Trout, the longest streak since the BBWAA began voting for MVP in 1931. And he’s done it to start his career.

Astros: The Astros pulled off a postseason first in Game 5 of the AL Championship Series. George Springer led off for the Astros with a homer in the bottom of the first. Then, in the ninth, Carlos Correa won it with a walk-off home run. It was the first time in postseason history that a team had a leadoff and walk-off home run in the same game.

Mariners: Kyle Lewis won unanimous AL Rookie of the Year honors, playing spectacular defense while hitting .262 with 11 homers. He got off to a fast start, registering at least one hit in each of the Mariners’ first 10 games of the season, becoming the third player in franchise history to do so, along with 2009 Endy Chávez and 1998 Joey Cora.

Rangers: Joey Gallo hit 10 homers in 2020, and pretty much all of them required a tape measure. He had an average home run distance of 417 feet, tied for third-longest in baseball (min. 10 HR).

Braves: The Braves scored 29 runs on Sept. 9 against the Marlins, coming just one run short of tying the Modern Era (since 1900) record for runs in a game, but setting the mark for an NL team in that span. It was a Modern Era record for the Braves, too, but the franchise had two games before 1900 that reached these levels: scoring 30 and 29 in two separate games in 1883 as the Boston Beaneaters.

Marlins: Sixto Sánchez introduced himself to the Majors in a fireballing way in 2020, averaging 98.5 mph on his four-seamer. The only pitcher to throw at least 100 four-seamers last year with a higher average velocity on them was Jacob deGrom, at 98.6 mph.

Mets: Amed Rosario did something on Aug. 28 at Yankee Stadium that we hadn’t seen since the 1800s. He hit a walk-off home run for the Mets — a road team. As we learned in 2020, the official designation of home and road teams is determined by venue, not who bats first. Thus, when the Mets and Yankees played a doubleheader at Yankee Stadium where the Mets batted second in one of the games, the Yankees were still technically the home team. So when Rosario hit a walk-off home run off Aroldis Chapman, he became the first visiting player to hit a walk-off home run since Ed McKean for St. Louis at the Cleveland Spiders on May 12, 1899, according to Elias. Trent Grisham did it for the Padres at Oracle Park on Sept. 25, too.

Nationals: At 21 years and 338 days old on the last day of the season, Juan Soto became the fifth-youngest player to win a batting title in the Modern Era, and the youngest to do it in the NL. The only younger batting title winners were 1996 Alex Rodriguez, 1955 Al Kaline and 1907-08 Ty Cobb.

Phillies: Rookie Alec Bohm debuted for the Phillies on Aug. 13 and made his mark quickly, ultimately finishing second to Devin Williams for NL Rookie of the Year. Bohm had 54 hits in 2020, 12 more than any other rookie from Aug. 13 through the end of the season. The only rookie with more RBIs in that span was Jared Walsh (26).

Brewers: Devin Williams struck out 53% of the batters he faced in 2020 — that’s not a misprint. How did he do it? His changeup, which he refers to as the Airbender, was a big reason why. His 61.1% whiff rate on the pitch was the highest for any pitcher on a single pitch type in 2020 (min 100 swings at pitch type), and his .032 opponent batting average on it was the lowest (min 50 PA ending on pitch type).

Cardinals: It was a shortened season, but Paul Goldschmidt looked like his All-Star self in 2020 for the Cards. His .380 expected weighted on-base average, which is based on quality of contact, ranked 10th in the Majors (min 200 PA).

Cubs: Kyle Hendricks was up to his usual tricks in 2020, averaging 87.3 mph on fastballs (four-seamers, two-seamers and sinkers). That was the second-lowest average fastball velocity among pitchers to throw at least 400 fastballs, behind only Brent Suter’s 85.5 mph.

Pirates: Ke’Bryan Hayes only played 24 games in 2020, all in September, but he led all rookies in Wins Above Replacement according to Baseball Reference. He had a 55.4% hard-hit rate and 18.1% whiff rate last year. No qualified hitter had a hard-hit rate that high coupled with a whiff rate that low — the two who came closest were NL MVP Freddie Freeman and perennial MVP candidate Mike Trout.

Reds: Trevor Bauer won the first Cy Young Award in Reds history, thanks to a 1.73 ERA and 0.79 WHIP. He also turned in a postseason start to remember, even in a team loss, when he threw 7 2/3 scoreless, walk-less innings with 12 strikeouts in Game 1 of the NL Wild Card Series. He’s the only pitcher in postseason history with an outing of at least 12 strikeouts with no walks or runs allowed.

D-backs: Blink, and you might’ve missed him. D-backs speedster Tim Locastro led the Majors in average sprint speed again, at 30.7 ft/sec. It’s the second straight season he’s done so, The only other player to lead the Majors in average sprint speed (min 10 competitive runs) in back-to-back years since Statcast began tracking is Byron Buxton, in 2015-16.

Dodgers: Mookie Betts homered in the eighth inning of Game 6 of the World Series as the Dodgers won the game and the title. Betts also homered in Game 5 of the 2018 World Series, when the Red Sox went on to clinch. He became the ninth player to homer in multiple World Series clinchers, and just the second to do it with different teams — joining Reggie Jackson.

Giants: The younger man they call Yaz continued to be a revelation for the Giants in his second year in the Majors. In 54 games, he hit 10 homers, with 35 RBIs and a .968 OPS. He now has 31 career homers, and reached that mark in his 158th career game. It’s not an apples-to-apples comparison, since his grandfather Carl debuted at age 21, not 28 like his grandson, but it is worth noting: the elder Yaz hit his 31st career home run in his 309th career game.

Padres: The Padres were, by many counts, the most exciting team to watch during the regular season. They set a record by hitting a grand slam in four straight games in August, and even though their starting pitching injuries caught up to them in the NLDS, they made their mark in the playoffs, too. In NL Wild Card Game 2, both Fernando Tatis Jr. and Wil Myers had multi-homer games. The only other set of teammates to both have multi-homer efforts in the same postseason game? Babe Ruth and Lou Gehrig, in 1932 World Series Game 3.

Rockies: Reliever Daniel Bard put together a comeback for the ages, returning to the Majors after not pitching at that level since he threw two games in 2013. Bard was the seventh player since 1990 to appear in at least five MLB seasons, then miss at least five full seasons before returning, though the circumstances each differed from Bard’s — which stemmed from control issues and the yips.