A year ago, when he was an Arizona State University slugger maybe headed for the 2020 MLB Draft’s first overall pick, Spencer Turnbull imagined summer, 2020.

It would be spent at some summer minor-league outpost. He would be dealing with everyday games, and heat, and professional pitching. It would be much like Army basic training. 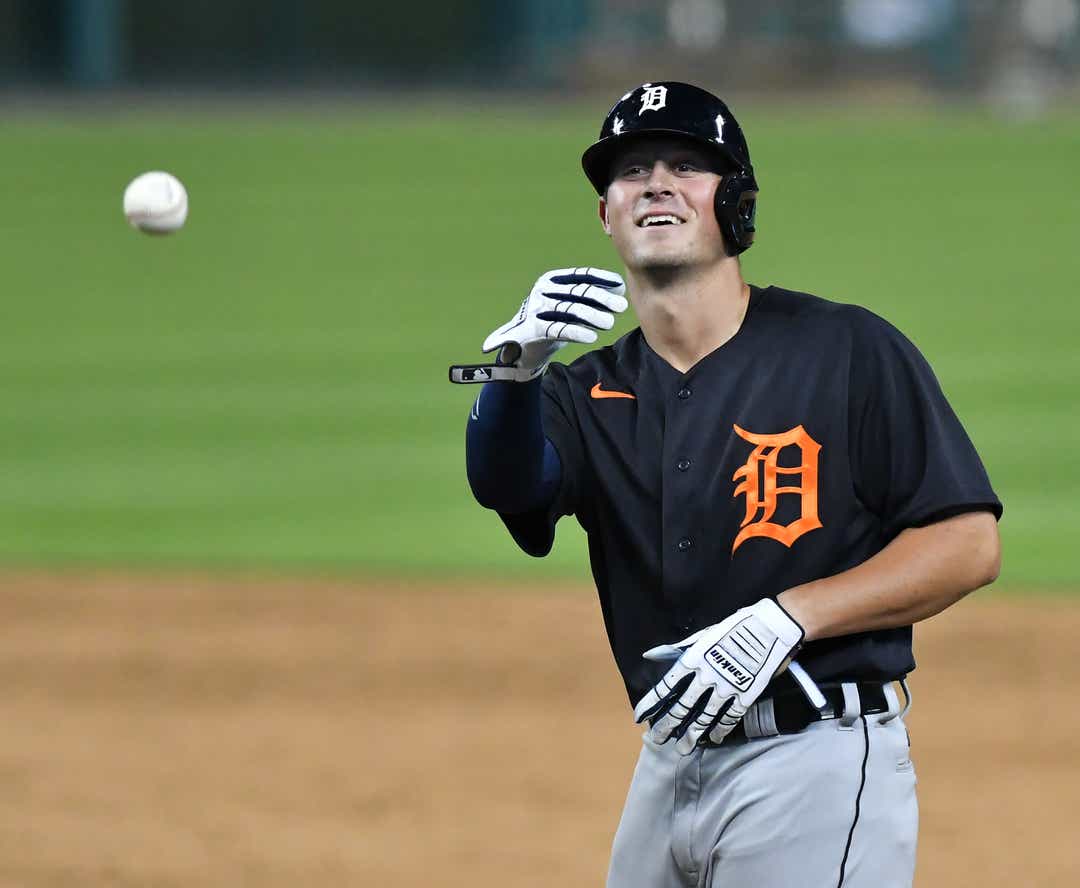 He did not envision this: showing up at Toledo’s Fifth Third Park at 10 a.m. and spitting into a tube destined to be checked for coronavirus. He did not, in his craziest moment of fiction, foresee playing games against older teammates and even coaches. With no one in the stands. With the only witnesses 20 or 30 knot-holers watching from outside Fifth Third Field’s outfield walls along Monroe and St. Clair streets.

And all of this after eating breakfast at a glassed-in, pandemic-proof table at Sunrise Skillet in downtown Toledo.

“We’re playing baseball, and not a lot of people can say that, so I think I’m handling it great,” said Torkelson, who in fact became the 2020 draft’s first choice and who six weeks ago signed an $8.416 million contract with the Tigers. “I’m having a lot of fun, just embracing it all. A lot of guys who’ve been in the organization longer than I have are showing me the ropes — the do’s and don’ts of learning how to be a professional baseball player.”

What a hallucinatory 40 days it has been for Torkelson. He signed in June and a couple of weeks later was in Detroit with star big-leaguers as they tuned up for a COVID-crimped MLB regular season.

Torkelson never was going to be part of the big-league cast that in late July would bore into a planned 60-game schedule. But he was chosen for the 60-man gang that would be split between Detroit and Toledo. There was a testament to his right-handed bat. Torkelson is a 6-foot-1, 215-pound infielder who tends to crush pitches more than whack them.

It meant he would, initially, be on Comerica Park’s field with Hall of Fame-ticketed folks like Miguel Cabrera. That he would hit against Matthew Boyd and power-armed Spencer Turnbull. And that he would begin his migration to third base where a guy who already has a Hall of Fame plaque, Alan Trammell, would tutor him on how to play left-side infield defense.

Now, the big-leaguers are at work and Torkelson is in Toledo with a 30-man taxi squad. He lives at a “not-five-star apartment complex,” by himself, where a dozen or so of the Toledo cast is housed. His next-door apartment neighbor is Tigers catcher Jake Rogers.

Torkelson tools around town in the kind of vehicle driven by men who just signed deals for $8 million-plus. He owns a 2020 Mercedez-Benz AMG G 63. It’s a SUV that retails for $156,450 and it’s a vehicle that might as well have a vanity license plate that says SCOTTBORAS. Baseball’s premier agent delivered to Torkelson the first, slot-surpassing signing bonus for a first-overall pick in MLB history.

Once the workouts, intrasquad games, weight-lifting sessions, and tutorials are finished, Torkelson generally heads for home, or maybe first to the grocery store. He figures that “75 to 85%” of his meals are whipped-up at the apartment, safe from restaurants where coronavirus can lurk. Dinner, video games, and Netflix get him through an evening before he hits the sack ahead of tomorrow’s still-unfathomable adventure.

What he has learned in six weeks is mind-jarring, Torkelson says. Baseball on this level is a daily deluge of discoveries. A dividend will come, he vows, from 2020’s surrealism. Any preparation for Detroit will get a boost from work against mostly seasoned professionals.

“Good experience to face these high-quality arms, these guys with velocity, tight breaking balls, and change-ups,” said Torkelson, who on Aug. 26 turns 21. “Every guy on the mound is good. There’s no comfortable at-bat.

“You’ve got to grind out every single at-bat. It kind of wakes you up. It’s not as easy as in college. There’s a learning curve here. But it’s fun to see progress in the batter’s box.”

Progress: Mostly, Torkelson says, that comes — no surprise — by adjusting to big-league fastballs that can be spotted in the strike zone. It’s seeing the sharper break on curveballs and sliders. It’s picking up on a sly change-up a good big-league-grade pitcher doesn’t for a nanosecond telegraph.

Coaches have done nothing particular with his swing or with his stance or mechanics, he says. And neither is that a shock. Torkelson was considered by most scouts in 2020 to be one of those hitters so skilled and strong that any over-tinkering could earn a hitting coach permanent exile.

Not that this has been any trip to the toy store. Hitting is sadistically difficult.

“You have your bad days, you have your good days,” said Torkelson, who broke all kinds of power and batting records during his ASU days. “Sometimes you forget that you once knew how to hit, because these guys give you such a nasty sequence.

“But then you have to forget about it. You clear your head. It’s not like in college where you can get out of bed most any day and get one or two knocks and be successful. Here, you’ve got to focus on every single at-bat

Torkelson sums it up this way: 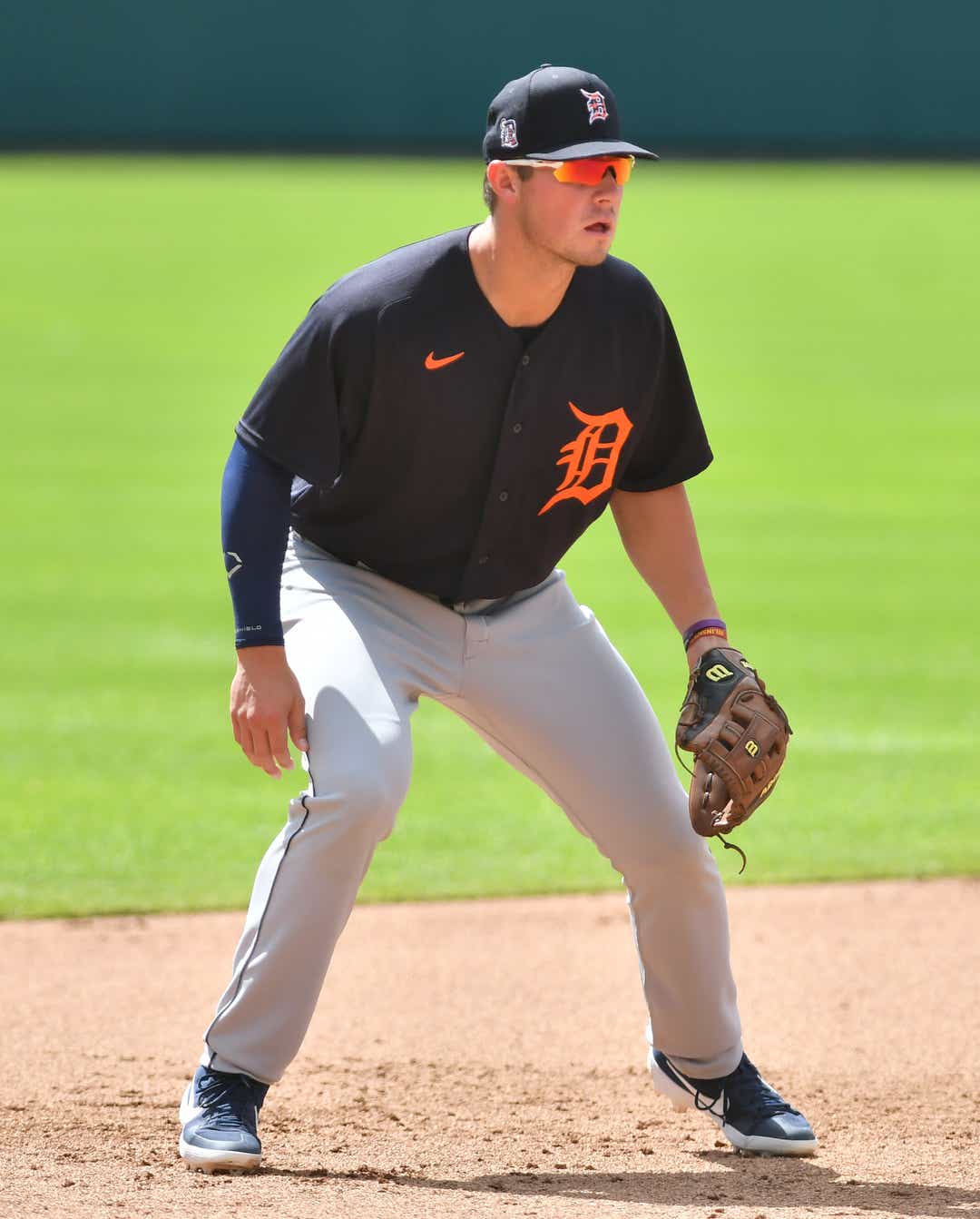 Trammell and the coaches likewise are on it — grooming Torkelson at third base. He was a first baseman at ASU, but only because the Sun Devils infield was loaded with glitzy guys who also would be early-round MLB picks. Ironically, one of them, Gage Workman, was ASU’s third baseman who in June was a fourth-round grab by the Tigers. Workman likely will get a shot at shortstop or perhaps will flip-flop with Torkelson and play first base.

The Tigers decided Torkelson had the stuff to play third. Moving him there, they wagered, was a no-risk investment in upside.

“I love it — love playing third base,” Torkelson said, explaining that Trammell’s Hall of Fame counsel has been key.

As for Trammell, he says the kid has it right. Trammell remembers a moment a month ago, at Comerica Park, when the gang of 60 was together and Torkelson was working a shift at third base during an intrasquad scrimmage.

“He’s up there with the big boys, and he had a topspin ball that ate him up and he didn’t make the play,” recalled Trammell, who is a special assistant to Tigers general manager Al Avila. “And I came up to him afterward and said: ‘I’m glad that happened to you.’

“And he looked at me kind of funny, but I told him I was glad because he got one of those topspin smashes that are hard to simulate in practice situations.

“Since then, he’s made all the plays. That was a good learning experience, and it happened right out of the gate.”

Torkelson’s arm at third is fine, Trammell said, explaining that it’s mostly now a matter of getting “Tork’s legs into the throw” after his earlier years at first base. Trammell says Torkelson’s bat is getting fire-tried at Toledo in the same manner as his glove. And he’s aboard with thoughts that this weird summer in its own peculiar way will have upside in getting Torkelson steeled for Detroit.

“I see a high baseball IQ to start with,” Trammell said. “And that’s no surprise because he’s a college kid who’s been around the block a little bit. But he understands concepts. We’ve thrown a lot at him, and the only reason we have is that he understands.

“But he looks great. I’m telling you, outstanding. But we need more reps, more of those tough ground balls hit to him during games.

Torkelson is not the only greenhorn at Toledo. Dillon Dingler, a catcher from Ohio State the Tigers swooped up in June’s second round, is working with the taxi squad. So is last year’s first-round prize, Riley Greene, who is a whole year out of high school.

“Dingler — you can see why they took him,” Torkelson said. “Great catcher, great arm, and he can swing it. Riley is an unreal athlete with a lot of power, and he has made some tremendous plays in the outfield. It’s fun to see him track down balls, robbing guys of homers, diving on catches. Just a cool guy to watch and be friends with.”

There are others in this mixed bag of former big-leaguers, upper-class minor-leaguers, and kid prospects.

“I’ll tell you someone who’s really impressed me,” Torkelson said, speaking of an ex-Royals first baseman the Tigers last year signed. “Frank Schwindel has been hitting the crap out of the ball.

“Another name I didn’t know coming in is Nolan Blackwood (sidearm right-handed reliever). Man, he throws Uncle Charlie (curveball) and it’s hard to hit. Probably the most uncomfortable at-bat I’ve ever had. He’s good, and he just comes at you.”

As it turns out, Toledo during a pandemic isn’t largely different from Detroit. There was little going on downtown during his Detroit intro when he stayed first at Motor City Casino’s hotel before moving to Aloft Detroit at The David Whitney. Nothing much happening in Toledo, either.

What seemed most stark, he said, were those days working out at Comerica Park. He knows about seasons when 3 million would show up for a spring-summer stream of Tigers games. He knows crowds often topped 40,000 during 2006-14 when the Tigers made five postseasons and two World Series.

“I’d see (on Comerica’s scoreboard) these highlights of old Tigers games, and the seats are packed, and you can see that there’s such an atmosphere,” Torkelson said. “It is awesome to play there. The infield’s unbelievable. I thought Arizona State’s field was perfect — and for college, it is. But stepping on that infield and fielding a ground ball at Comerica is totally different.”

So, too, is a ballplayer’s life, in any context, in 2020. One thing about those sweaty pre-pandemic summers on the farm is that a minor-leaguer could, once in a while anyway, escape to a bar, or to a restaurant, or to the mall for some air-conditioned leisure.

Torkelson doesn’t hit drinking age for a couple of weeks, so the bar has been off-limits in any event. Restaurants are dicey, he says. If there’s an outdoor patio with proper distancing, he and a teammate or two might opt for someone else cooking. It’s about the only COVID-19 indulgence available.

“I don’t think about it that often, but this is all so different, so new,” Torkelson said. It’s awkward and uncomfortable. But, for the most part, everyone’s on board — all hands on deck. It can suck, and you can get bored.

“But we’re playing baseball and this is what you have to do to play baseball these days.”