Almost halfway through the Detroit Tigers’ season, I have a confession to make.

I’m surprised that we have even reached this point. In the first week of this strange, shrunken season, I was starting to think it was going to be shut down because of COVID-19.

But here we are — one game from the midpoint for the Tigers, which is a significant achievement, especially during a pandemic. The Tigers are 13-16 in a year when playing .500 ball will probably get them into the playoffs. So they are within striking distance. Unless they get swept by the Minnesota Twins this weekend, which is actually possible, they are going to play meaningful games in September.

No, I didn’t see that coming — not in a million years — back when I was covering the Tigers in spring training in Lakeland.

Back then, I was certain that Miguel Cabrera was going to come out hot and have a fantastic season. But I was wrong, even though he’s heating up, hitting .308 in his last seven games.

So this has already been a season full of surprises.

Here are some others:

Right now, Isaac Paredes and Jeimer Candelario look like legit major league players who will take important roles in this rebuild. After a rough start, Candelario has impressed, hitting .300 in his last 15 games.

“I feel very proud about what Candelario has done,” Tigers general manager Al Avila said Thursday during a Zoom call with reporters. “He scuffled a lot at the beginning of the season. He kept on battling, grinding it out and now he’s enjoying a good season. Actually, he’s now become the player we all thought he was gonna be.” 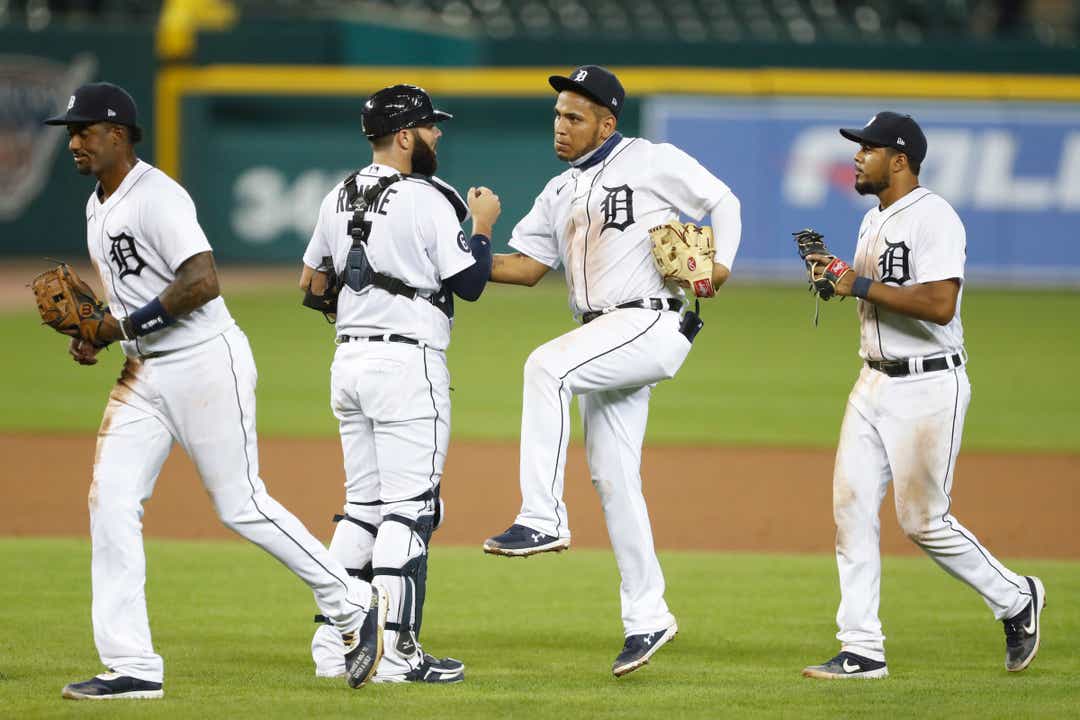 Parades hasn’t even played 10 games yet but he looks like a big-league hitter, just from his approach.

“Here’s a 21-year-old kid who hasn’t played beyond Double-A,” Avila said. “He missed summer camp. He goes to the alternate training camp, where it’s limited amount development time that you can get there … we bring him up and he doesn’t look like a kid. He looks like a big leaguer and so you got to give kudos to a kid like that. It’s amazing to me.”

If I had to make an educated guess, the Tigers will stand pat at the trading deadline. They certainly aren’t shoppers. And who could they trade?

Most teams want pitching, and the Tigers don’t have many pitchers who have shown consistency. Matthew Boyd’s struggles have effectively taken him off the market.

Jonathan Schoop has had a fantastic season, but I just don’t know what another team would give up for a 30-game rental. I’d rather see the Tigers extend him, at least for one more season, than trade him.

The guy who must step up

The next 30 games are incredibly important for Christin Stewart. He has played in more than 140 games over parts of the last three seasons, but he just hasn’t shown the power the organization expected.

“Obviously, he’s been struggling with a bat for sure,” Avila said. “And that that’s one area that concerns.”

In his first 22 games, Stewart was hitting .158 with two home runs.

This is his chance. This is his opportunity. There are several outfield prospects waiting in the wings and Stewart must up his production.

It doesn’t matter how many games Casey Mize and Tarik Skubal win this year. All that matters is that they are up in the big leagues, getting experience and learning from their mistakes.

But here’s a gut feeling: They are both so smart and so polished and have such good stuff, that I think they will figure it out quickly. They will learn and make adjustments and win some games, helping this club right now.

Goodrum is scuffling at the plate.

“Obviously we’d like to see the more walks and cut down on the strikeouts,” Avila said.

But Avila said that Goodrum has proved he can play short, and it’s clear that the organization sees Goodrum as part of the rebuild.

“With that continued power, you know, you have a pretty good player there that we would have for a long time,” Avila said.

But what position will he play?

Perhaps, that doesn’t matter. Not until he starts hitting again.

Matt Manning and Alex Faedo have been shut down because of slight forearm strains. That’s a serious bummer because I was hoping that they would get called up at some point, like Mize and Skubal. There is a huge benefit of getting MLB experience.

Avila suggested neither injury is considered serious or projects to be a long-term issue.

But this just feels like a wasted year for them.

You can justifiably criticize Avila for plenty of moves over the years.

But he made several fantastic decisions building this roster — even if it’s just in the short term — after signing Schoop, Austin Romine, C.J. Cron and Cameron Maybin.

Schoop has been fantastic. He seems to get a hit every time you look up.

And Romine has been outstanding.

Personally, I wish the Tigers would extend Schoop and Romine. But the Tigers have not set their 2021 budget and don’t know what next year will look like. Will be fans in the stands? So it’s too early to start talking about signing people.

“You know, obviously Romine has been great,” Avila said. “He’s come through like a charm, and Schoop is having a great season.”

What happened to Jones?

Jones hit .423 in July, with three homers in eight games.

But he has struggled, hitting just .220 in August.

“JaCoby had a great start, and he’s working through some minor injuries here and there that is slowing him down a little bit, but he’s grinding it out,” Avila said.

If I could wave a magic wand

Man, I wish Jake Rogers was getting some time in Detroit right now. And the same goes for Daz Cameron and Derek Hill. But it doesn’t look like any of them will get a shot this season, not unless there are some injuries.

Gardy holding to together

You have to give Tigers manager Ron Gardenhire credit. Despite a nine-game losing streak, this team still has a shot at the playoffs.

Somehow, Gardenhire has kept these Tigers in games by relying heavily on his bullpen.

Now, that can’t last – the bullpen would be exhausted.

But the Tigers can still think about playoffs, at the halfway point, mainly because that bullpen has been so good.