Detroit Tigers infielder Sergio Alcantara has been one of the best defensive players in the organization’s farm system since he was acquired from the Arizona Diamondbacks in 2017 with third baseman Dawel Lugo and shortstop Jose King in exchange for J.D. Martinez.

Yet his offense still hasn’t come around.

Now at 24 years old, and with other infield prospects on the rise, Alcantara’s clock is winding down.

The Tigers (17-17) gave him a vote of confidence by calling him up from the alternate training site as the 29th player for Friday’s doubleheader against the Minnesota Twins at Target Field. To make a long-term impact as the franchise begins to crawl out of its rebuild, Alcantara must prove he can make solid contact at the plate.

“I’ve been waiting for this for a long, long time,” Alcantara said Friday. “When I was down there, I was doing my job so I could be able to have this opportunity.” 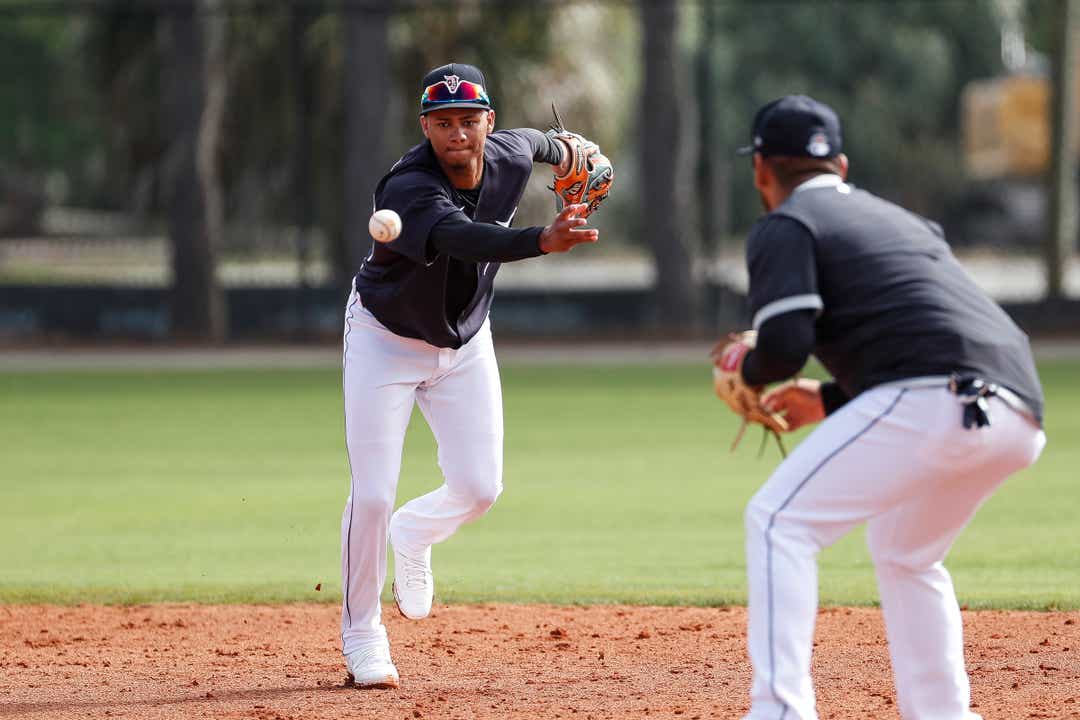 Alcantara began to demonstrate what he could become offensively during spring training, which was cut short March 12 because of the COVID-19 pandemic.

In 11 games, he was 8-for-18 (.444) with one double, one triple, four RBIs and two walks. He only struck out twice. His defense was stellar — no errors in nine games at shortstop and two games at second base.

“I’ve always tried to figure out if he’s going to be able to hit at this level,” Gardenhire said Friday. “I know he can play defense. … My question (was) whether he was going to be strong enough to hit. I tell you, in spring training, he hit. He was hitting line drives and had a really nice stroke going. I was impressed. That’s probably as good of an improvement as you can see on any of our young players. I think he’s moving along just fine.”

What makes the limited spring training sample frustrating is Alcantara missed most of the team’s summer camp in July because of a positive COVID-19 test. He said he didn’t lose weight or feel any symptoms; his only setback: Being quarantined for two weeks.

Between the shutdown and Alcantara’s coronavirus test, the Tigers didn’t get to determine whether his offensive display against big-leaguers would stick. Last season, he hit .247 with two homers, 27 RBIs, 48 walks and 71 strikeouts in 102 games for Double-A Erie.

“I spent two weeks doing literally nothing,” Alcantara said. “That’s pretty hard for a player because you have to work every day, day in and day out.”

He returned July 16 from the injured list, but summer camp broke July 20 for two exhibition games in Cincinnati. That forced Alcantara to Fifth Third Field in Toledo to train with the reserve squad. He has been there ever since — until now.

“You can see all of those things getting blossomed,” Alcantara said. “I’ve got to thank God for that. What I’ve got to do is keep working very hard on my hitting. That was my weakness, but I am getting stronger.”

For subscribers: Can Detroit Tigers really make the playoffs? We predict rest of the season

Moving past a bad loss

The Tigers allowed 10 walks and hit two batters in Wednesday’s 8-5 loss to split a two-game series with the Milwaukee Brewers. What started as a 3-0 lead in the first inning turned into an ugly loss for a ballclub riding a six-game winning streak.

“We were just lucky to be in the game, honestly,” Gardenhire said Wednesday.

For subscribers: Detroit Tigers have chance to do the unthinkable in September: ‘This is very doable’

Brewers outfielder Christian Yelich, the 2018 NL MVP, entered the game with a .207 batting average, and the Tigers walked him in four of his five plate appearances. His only official at-bat was a first-inning strikeout.

“I felt really good in the first two innings, and then in the third, just started battling the mechanics,” Turnbull said Wednesday. “Felt out of sync, wasn’t getting loaded in my legs the way I wanted to.”

The three-run loss felt like one that could send the Tigers into another downward spiral, forcing them out of contention in the expanded 16-team playoffs in the shortened season.

“When you walk or hit people, that’s just too much traffic out there,” Gardenhire said. “That’s a recipe to get beat, which we did tonight, and we still had opportunities. Their pitches came in and made some good pitched. And like I said, you can’t walk 10 and two batters. You don’t work out too good when that happens.”