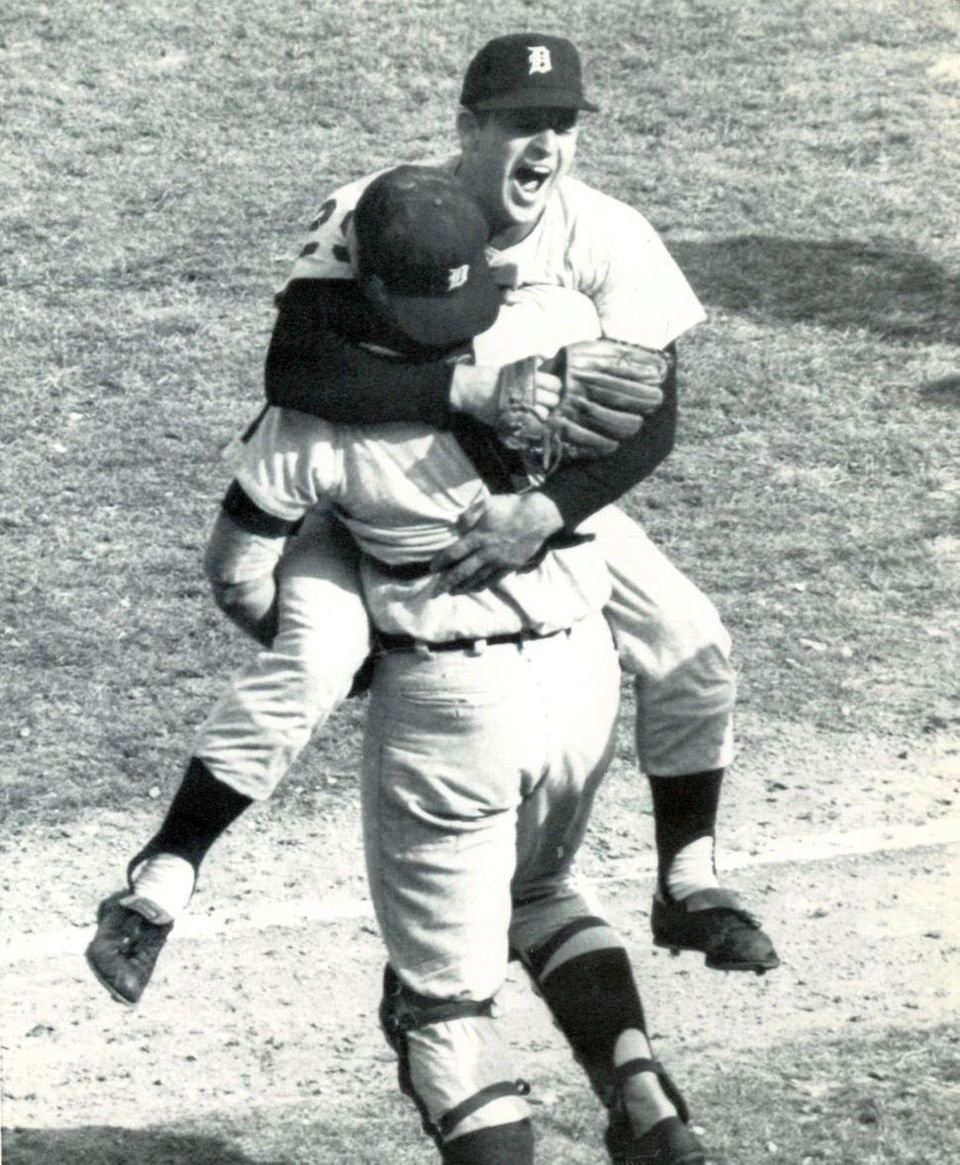 Pitcher Mickey Lolich jumps into the arms of catcher Bill Freehan in celebration of the 1968 World Series win in game seven.

This week, I present the Detroit Tigers All Star team for the 1960-1969 decade.  All Star teams for previous decades are found below:

The 1960s decade was a decade of change in Major League Baseball.  After 60 years of 16 teams and two eight-team leagues, baseball expanded rapidly during the sixties.  MLB added four teams in 1961-1962 and four more in 1969 alone.  They also extended the schedule from 154 to 162 games starting in 1961 in the American League and 1962 in the National League.  In 1969, they went to four divisions of six teams each, two in each league.

For the Tigers, it was mostly a winning decade capped by their third world championship in 1968 amid riots and turmoil in the motor city.  In 1961, they went 101-61 and led the league with 841 runs scored despite the presence of the Mickey Mantle and Roger Maris powered Yankees.  Unfortunately, the Yankees were better at run prevention and finished eight games ahead of the Tigers with 109 wins.  In 1967, the Tigers took it to the last game of the season finishing with 91 wins and a game out of first. The Tigers had only two losing seasons – 1960 and 1962 – and did not stray far from .500 in either of those years.

The decade All Star team is listed in Tables 1 and 2 below and player profiles follow.

Freehan was a powerful and durable catcher who was excellent both offensively and defensively.  He was the top catcher in the game during the 1960s peaking with two fantastic seasons in 1967 and 1968.  He posted a 144 OPS+ and 6.1 WAR and finished third in the MVP balloting in 1967.  He followed up with a 145 OPS+ and 7.0 WAR and was runner-up to teammate Denny McLain in MVP voting in the 1968 championship season.

The slugging catcher is 15th among MLB catchers in career WAR and some argue that he should be in the Hall of Fame.  Bill James ranked him the #12 catcher in the  New Bill James Historical Abstract.

A Detroit native, Freehan grew up in suburban Royal Oak where he started catching at a young age.  During one Little League All Star game, he was bowled over at the plate by future Tigers teammate Willie Horton (Trey Stecker, SABR.org)

Cash had fun playing the game and  was very popular with teammates, fans and media.  He was the last batter facing Nolan Ryan in a contest in July, 1973 in which the fireballer was completing a no hitter and 17-strikeout game.  According to Tigers outfielder Jim Northrup, “Norm walked up to the plate with a table leg from the locker room. The plate umpire, Ron Luciano, says, `You can’t use that up here.’ Cash says, `Why not, I won’t hit him anyway.’ He then gets a bat, then hit a popup to shortstop to end the game. As he was walking away he says to Luciano, `See, I told ya.'” (Bill Dow, Baseball Digest, 2001)

Dick McAuliffe playing more shortstop than second base during the decade left the keystone spot open for either Jake Wood or Jerry Lumpe. Neither was a star, but Wood edged out Lump thanks to superior hitting and good baserunning.  Wood had an interesting statistical combo in his rookie year in 1961 playing every Tigers game in the league’s first 162-game season and leading the American League in both triples (14) and strikeouts (140).  He finished third in the league in steals each year from 1961-1963 with 30, 24 and 18 respectively.

I ranked McAuliffe as the Tigers third best second baseman ever behind Charlie Gehringer and Lou Whitaker, but the early part of his career was spent mostly at shortstop where he was the usual Tigers starter from 1963-1966.  McAuliffe often looked awkward both at the plate and in the field, but was a steady performer for 14 seasons in Detroit.  He peaked from 1966-1968 when he averaged 5.6 WAR per season.  His best season was 1966 when he posted a 148 OPS+ with 6.0 WAR.

Steady, but unspectacular, Don Wert played with some good teams in the 1960s.  He played over 1,000 games at third base, was an above average defender and had a couple of seasons with OPS+ slightly over 100.  His best season was 1965 when he accumulated 3.2 WAR.

On September 17, 1968, the Strasburg, Pennsylvania native stroked a game winning single in the bottom of the ninth inning to defeat the Yankees 2-1 as the Tigers clinched the American League pennant.

In Spring training, 1964, manager Chuck Dressen asked Wert to be more vocal at third base and Wert responded with high pitched chatter that sounded like a yipping Coyote.  Thus, he acquired the nickname “Coyote” (John Milner, SABR.org).

Rocky Colavito came from the Indians in 1959 in a famous of swap of the batting leader (Harvey Kuenn) and home run leader (Colavito).  Colavito played four years with the Tigers including a fantastic 1961 season with 45 homers and a 157 OPS+.  He finished in the top five in the American League in WAR in both 1961 and 1962.  He also had perhaps the best outfield arm in the majors during his prime.

Fan favorite Mickey Stanley accumulated 17 WAR during his career which was fifth among Tigers center fielders.  He was a below average hitter and strong strong fielder.  He won four Gold Gloves in centerfield, although there is no indication from statistics that he was as elite defensively as he was billed.  Stanley’s 1,175 games in center field was second most to Ty Cobb in franchise history.

Stanley’s claim to fame was that manager Mayo Smith played him at shortstop in the 1968 World Series with little previous experience at the position.  The move was made because the Tigers had four good outfielders with Al Kaline returning from an injury and a notoriously weak hitting shortstop in Ray Oyler.  Stanley held his own at short and the Tigers won the Series.

This All Star team might look better if I moved Stanley to shortstop, McAuliffe to second and Jim Northrup to center field, but I wanted put players at their primary positions. Northrup is the best Tigers player to be shut out of the decade All Star teams thanks to great outfield depth and Northrup never really having a regular position

Al Kaline joined the Tigers straight out of high school in 1953 at age 18 and remained with the organization in some capacity until his death in 2020.  That amounted to more than half the team’s existence. He led the league in batting (.340) and accumulated 8.2 WAR at the age of 20 in 1955.  That turned out to be arguably his best season, but he had a lot of other great seasons in route to the Hall of Fame.

Mr Tiger was never the best player in the league in the sixties, but was often one of the best and always good.  His WAR rounded to three or more every year and he finished in the top ten six times during the decade. He also hit for an OPS+ of 130 or more eight times.

“People ask me, was it my goal to play in the majors for 20 years? Was it my goal to get 3,000 hits someday? Lord knows, I didn’t have any goals,” Kaline once said. “I tell them, ‘My only desire was to be a baseball player.’” (BaseballHall.org)

Born and raised in Detroit, Willie Horton was a home town town favorite for his performance both on and off the field.  On the field, he was a top slugger for many years finishing in the top ten in home runs five times and slugging four times.  He was at his finest during the 1968 championship season hitting 36 home runs and posting a 165 OPS+.

Off the field, Horton helped to restore order during the 1967 riots by climbing onto a truck and pleading with fellow African Americans to stop looting and committing violence.

McLain was baseball’s last 30-game winner in 1968 and he continued to dominate in 1969.  He won both the Cy Young and MVP in 1968 leading the league in innings (336), Wins (31) and complete games (28).  He won another Cy Young in 1969 with a 134 ERA+ in 325 innings.  McLain made his mark off the field as well.  He was an accomplished organ player who frequently performed in nightclubs.  He also appeared on the The Ed Sullivan Show and other popular programs and was featured in Life and Time magazines.  He was a national star and he loved the limelight.

After 1969, it was all downhill for McLain.  In February 1970, Sports Illustrated published a story linking him to gamblers and organized crime.  Among other things, the article suggested that a foot injury in 1967 was the result of a mobster stepping on McLain’s toes when a partner could not cover a bet.  Because of the story, Commissioner Bowie Kuhn suspended McLain for the first half of the 1970 season.  Later in the season, Kuhn suspended him two more times, once for pouring water over the heads of reporters and again for carrying a gun.

After his career, it got worse.  He tried to make a living in radio and television and other various occupations but he built up large debts and went bankrupt,  He later turned to loan sharking and bookmaking and was imprisoned in 1985 for racketeering, extortion and drug trafficking.  He went to prison again in 1996 after stealing $12.5 million from the pension fund of his meat-processing company.

Mickey Lolich is the Tigers all-time strikeout leader with with 2,679.  The portly lefthander had three complete game wins in the 1968 World Series leading his team to an improbable comeback after being down three games to one versus the Cardinals. His best regular season in the sixties was 1969 when he won 19 games, posted an ERA+ of 124 and finished second with 271 strikeouts.

Bunning had, in effect, two baseball careers reaching 30 WAR with both the Tigers and Phillies.  The Southgate, Kentucky native reached six WAR twice and led the league in strikeouts twice as a Tiger.  Unfortunately, he was traded too soon as he had his three best seasons in Philadelphia from 1965-1967.  He was inducted into the Hall of Fame in 1996.  After his playing career, Bunning was a long-time Kentucky congressman serving in both houses.

Wilson was a double threat on the mound and at the plate showing surprising power for a pitcher.  He was 12 WAR as a pitcher with the Tigers, but also helped himself with 3.3 WAR as a batter.  In 1968, he hit 7 home runs for the second time, a total surpassed by only Wes Ferrell (9 with the Indians) in 1931.

As a rookie for the Cleveland Indians in 1956, Aguirre struck out Boston Red Sox legend Ted Williams the first time he faced him. Aguirre later asked Williams to autograph the ball and the slugger reluctantly agreed.  A couple of weeks later, the “Splendid Splinter” pounded Aguirre’s first pitch for a home run. While rounding the bases, Williams shouted to Aguirre, “Get that ball, and I’ll sign it, too.”