11:59am: Morosi adds that the deal is agreed upon pending medical reviews.

11:55am: Jon Morosi of MLB Network reports the Tigers are close to acquiring Nick Maton, Matt Vierling and Donny Sands from the Phillies in exchange for Soto and Kody Clemens.

11:34am: The Phillies are “working on a trade” to acquire left-handed reliever Gregory Soto from the Tigers, according to Jim Salisbury of NBC Sports Philadelphia.

The deal adds a quality left-arm reliever to Philadelphia’s bullpen, which has already added fellow lefty Matt Strahm and right-hander Craig Kimbrel this off-season. It also continues the reigning World Series runner-up’s bid to go one better in 2023, as they’ve also added Taijuan Walker and Trea Turner in a productive winter for Dave Dombrowski’s team.

Signed out of the Dominican Republic back in 2012, Soto came up through the Tigers’ system as a starting pitcher. He’d make seven starts for Detroit in his rookie year back in 2019, but was rocked to the tune of an 8.49 ERA and has been a reliever ever since. He’s found plenty of success in that role, working to a 3.57 ERA over 181 1/3 relief innings, including earning trips to the All Star game in 2021 and 2022. 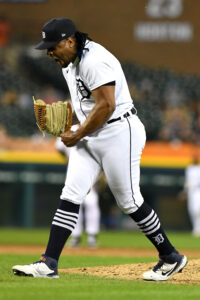 Left-handed hitters hit just .225/.328/.277 against Soto, but perhaps most noteworthy is the fact he’s given up just one home run in his career to a left-handed hitter. While he handled the closing duties in Detroit, he’s joining a much stronger bullpen in Philadelphia so may see fewer ninth-inning opportunities, but in any event they’ve got an ideal late-innings arm to shut down any left-handed power threats late in the game.

Soto mixes a fastball which touches triple-digits with an 89 mph slider, as well as a very occasional changeup. As evidenced by his career 13.1% rate, walks have been the biggest issue for Soto during his career. Even with the below-average walk rate Soto has been a valuable relief arm, but if he can tighten up the free passes he has the stuff to blossom into an elite late-inning arm.

The Phillies pen now includes Kimbrel, Soto and Strahm, as well as Seranthony Dominguez, Jose Alvarado, Andrew Bellatti and Connor Brogdon. In Alvarado and Soto, they’ve now got two of the hardest throwing left-handers in the game, with both possessing the ability to reach 100mph.

He logged time at first, second and third base in 2022, as well as some time in left field. Though it was a small sample size, he did earn two Defensive Runs Saved for his work at first and third. While unlikely to be a regular in Philadelphia, Klemens comes with two minor league options remaining so should serve as depth/bench piece.

As for the return, Detroit picks up three players who were all on Philadelphia’s 40-man roster. Sands is a 26-year-old catcher who earned his first taste of the big leagues in 2022, appearing in three games for the Phillies. Acquired from the Yankees last winter, Sands made 57 appearances at Triple-A last year, slashing .309/.413/.428 with five home runs. It’s a strong slashline, but with J.T. Realmuto ahead of him Sands was never likely to get an extended look in the big leagues. The Tigers have Eric Haase and Jake Rogers as catching options, but Sands will join that mix and could be in line to serve as a backup.

Maton, 25, is a utility player who appeared in 35 games for the Phillies last year, slashing .250/.341/.514 with five home runs over 85 plate appearances. That was a solid follow-up to his rookie year in 2021, when he hit .256/.323/.385 over 131 plate appearances. He came through the Phillies system as a shortstop but bounced around the infield and outfield in the majors. Javier Baez is locked in at shortstop for the Tigers, but they don’t currently have an obvious option at third so Maton could see plenty of time there as the Tigers look to see if his strong showing in 2022 can be sustained over a full season.

Vierling, 26, wound up picking up 357 plate appearances for the Phillies last season, putting together a .246/.297/.351 line with six home runs. He logged 434 2/3 innings in center, earning -7 Defensive Runs Saved. Vierling graded out much better in a corner spot, earning 1 DRS over 175 innings in right. He also logged a handful of innings at first, second and third. He should compete for a bench spot in Detroit as a fourth outfielder.

While there’s no highly rated prospect going back to Detroit in the deal, all three players are ready to contribute to the major league club in 2023. For the Phillies, these three players would have found opportunities hard to come by in 2023 unless injuries hit, given the established nature of their contending roster. As such, it’s a solid move from Dombrowski to flip them for a player that immediately makes their big league roster stronger.

The NL East is shaping up as a tough division going into 2023. While the Nationals are in full rebuild mode, and the Marlins look short of contention, the Phillies, Mets and Braves have all been aggressive this winter and will head into the new campaign with ambitions of going all the way.