Detroit — It was bedlam. The Tigers had just clinched the World Series in St. Louis with an epic comeback, 52 years ago.

In the middle of the clubhouse, Denny McLain was vigorously shaking a magnum of champagne and firing the liquid off in a sizzling stream. His targets were teammates, general manager Jim Campbell and a variety of bystanders and interlopers. 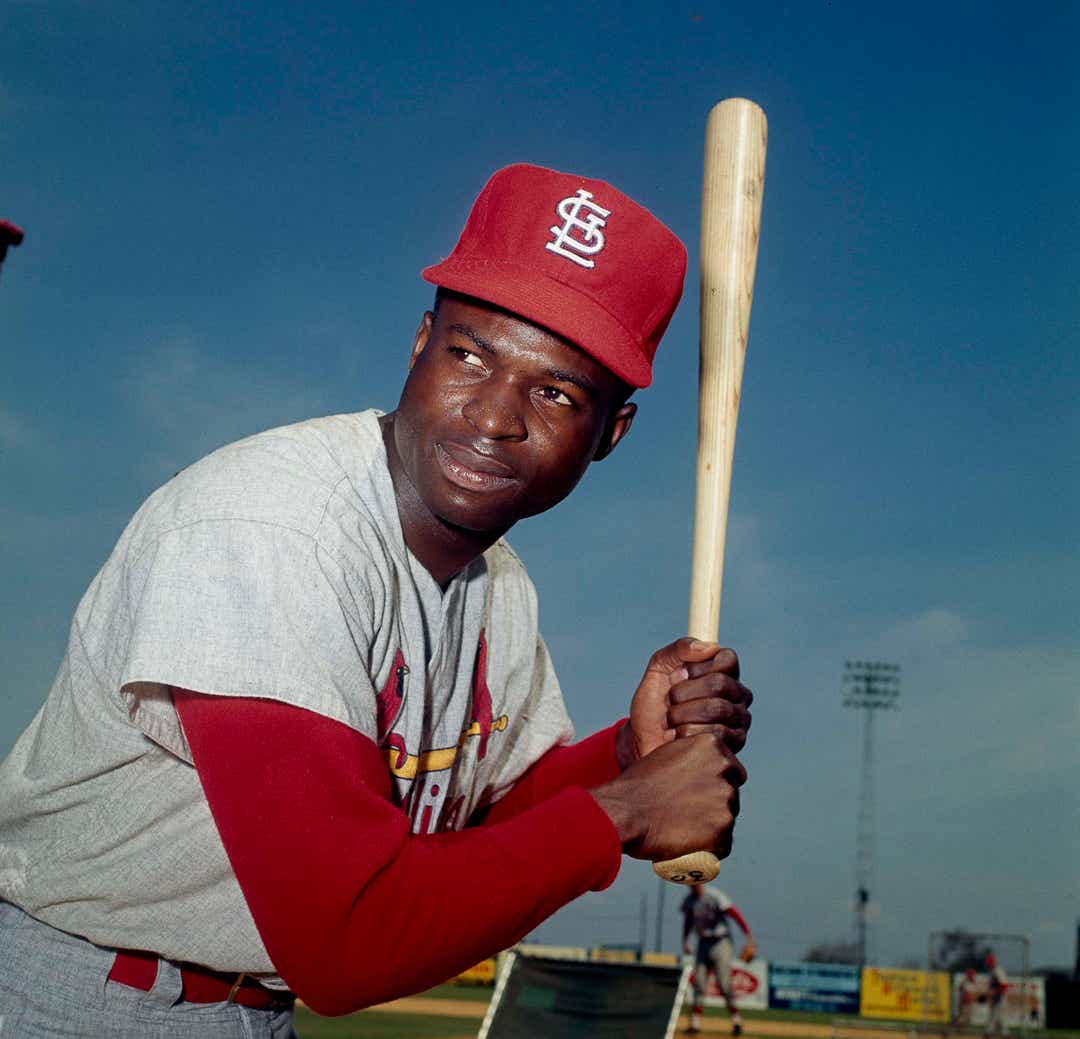 “Look, Denny’s spraying the writers,” Al Kaline said to me in a corner of the clubhouse. He was holding his own champagne bottle, sipping it, then handed it to this 40-year-old sportswriter for a taste.

We both grinned on the fringe of the bedlam, Al, dignified as always, as we observed the revelers.

Dick McAuliffe had swiped Campbell’s goofy hat and was wearing it at a goofy angle, making a goofy face. Mac was gripping his own bottle of champagne and sharing it with Jim Northrup and Mickey Stanley.

Norm Cash was somewhere in the middle whooping it up with his familiar warcry.

Near the door, Ernie Harwell was interviewing Mickey Lolich, then Northrup, Willie Horton and Bill Freehan for the radio celebrants back home in Detroit.

This was the scene — still vivid and fresh — in the Tigers’ clubhouse about 4 p.m. on Oct. 10, 1968. The Tigers had just defeated the Cardinals in Game 7 with their glorious comeback. They were the new world champions.

And into the bedlam walked Lou Brock. He had a solemn smile and had come from the Cardinals’ clubhouse on a solitary mission.

He went around the room, dodging the sprayed champagne, to shake hands with the victors. Many of them suspended their celebrating to accept the congratulations. The athletes themselves paid deep respect to Brock for his bravura performance in the seventh game of that World Series.

And now they are joined. Joined in death this sad year of so much misery, Al in April, Lou on Sunday, this Labor Day weekend.

Two of the most dignified athletes. Ever!

And in truth, Brock, with his speed and hitting, had scared the bejabbers out of the Tigers. 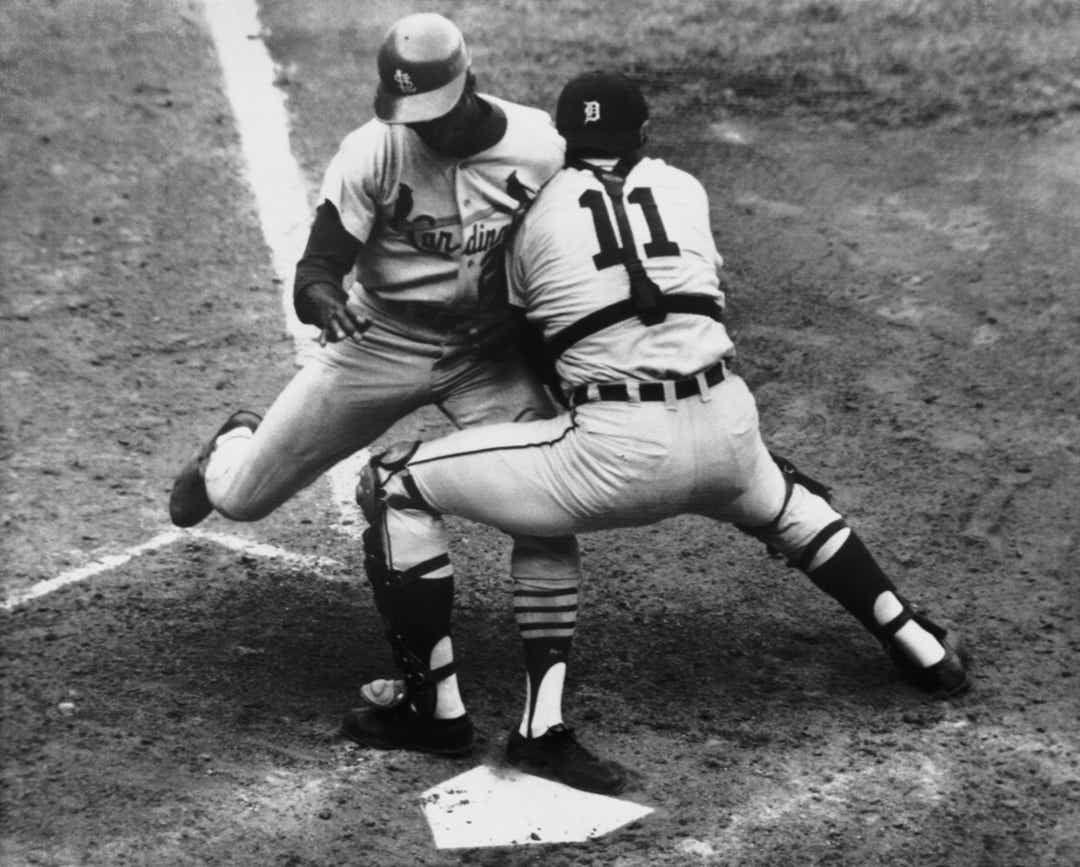 Play at the plate

It was his daring speed first, then his timely hitting. Just his presence.

For the World Series, he stole seven bases; he went 13-for-28, a .464 batting average; three doubles, a triple and two home runs; a perpetual threat.

Yet, and here is the beauty of irony: Brock’s speed and daring on the basepaths most likely cost his Cardinals the World Series.

In Game 5, the Cardinals had their three-victories-to-one advantage and were primed to clinch the Series.

It was a gray Monday at Tiger Stadium. The afternoon before, Brock had a home run, a triple and a double, plus a stolen base, in the Cardinals’ 10-1 victory on the rainy Sunday. That Game 4, Bob Gibson beat McLain for the second time.

The crowd and athletes on the field stirred at the presentation of The Star-Spangled Banner. We all stood in tribute, as always. The words were familiar, but the fashion in which they were sung was not. Jose Feliciano, the blind Puerto Rican troubadour, sang in his own lilting version. That, itself, started a trend of personalized deliveries of our national anthem.

Then the ballgame started. It started with Brock leading off with a double and scoring on Curt Flood’s single. Then Orlando Cepeda hit a home run. The Tigers were behind 3-0 in this desperation game after Lolich had faced four batters.

The Tigers were down 3-2 in the fifth when the Cardinals had another rally in progress. Brock doubled with one out, his third hit. Julian Javier followed with a single to left and Brock took off. Around third, headed for home plate.

Thus, the setup of the most historic defensive play in the Tigers’ 120 seasons of baseball.

There was a helluva collision.

And Doug Harvey, the ump, raised his thumb and called Brock out.

Brock, for sure, believed that he was safe, and the Cardinals should have been in command, 4-2.

Why, why didn’t Brock slide? A curiosity question even now.

Photographs and Brock’s spike marks that Freehan noticed in front of home plate are proof that Harvey’s judgment was correct. A footprint in the sand was key.

“They were 2 ½ inches from the plate,” Freehan said about the spike marks. “The umpire said if he’d had slid he would have been safe. I was surprised that he didn’t slide. But I’m glad that he didn’t.”

The Tigers rallied in the bottom of the fifth. Kaline hit a bases-loaded single and drove in Lolich and McAuliffe. The Tigers were ahead — and rescued themselves with a 5-3 victory.

“I thought I was safe,” Brock insisted to the press after the game about the stand-up collision with Freehan. “If I slide, he could come down on me with his knee, and I wouldn’t reach the plate.

“I tried to run through him.”

Still with a chance, the Tigers won Game 6 in St. Louis, 13-1, on McLain’s pitching and a 10-run rally in the third inning powered by Northrup’s grand slam. Northrup’s 1968 specialty, with five grand slams. And two singles by Kaline in that rally.

“We battled back — this has been the trademark of our team,” Kaline said after victorious Game 6.

He now had seven hits in the World Series. It had become, as I look back now through some tears, a duel in the sun between Al Kaline and Lou Brock.

“We wanted it to go down to seven games,” Kaline told me after Game 6. “We didn’t want to lose four games to one.”

Again, it was Lolich as manager Mayo Smith’s mainstay starting pitcher. A duel against Bob Gibson, another Hall of Famer, who is now age 84.

Nothing-nothing into the bottom of the sixth. Then Brock led off with a single, his 13th hit of the World Series.

Lou Brock had a famous trick when he was on first. He would lead off base and gradually increase his lead step-by-step to 15 feet. His idea was to entice the pitcher to throw to first base. Brock had stolen a bunch of bases in that manner.

Lolich did make the pickoff throw to first, and Brock dashed forward in his attempt to steal second. But Cash, the first baseman, relayed Lolich’s throw, to Stanley, playing shortstop.

The Tigers had caught him for the second time on the basepaths in the World Series.

Had Brock been safe this time, he likely would have scored on Flood’s following single. Then Lolich picked Brock off first, too.

And the score stuck at 0-0 as the tension grew and grew. It stayed 0-0 until the Tigers had two outs in the seventh. Then Cash singled to right off Gibson and Horton grounded a single.

Jimmy Northrup — always fierce, always angry, always a force — stepped up to face Gibson.  Northrup lined the pitch to center field. Flood did take a step in; I saw the replays twice this summer. And Northrup’s drive streaked into the center field pasture.

It was a triple, 0-0, no longer. Two runs scored. Then Northrup scored on Freehan’s single, a shot to left out of Brock’s reach.

The Tigers won Game 7 by a 4-1 score, Lolich’s third complete-game victory, all nine innings of pitching.

And the clubhouse of the champions was bedlam.

“It was worth waiting 16 years,” Kaline told me that afternoon by his locker in the corner.

He had never attended a World Series game until he played in one, after Mayo Smith maneuvered him into the lineup after a season of injury and the move of Stanley from center field to shortstop.

“I’d seen my other World Series in the country club, watching on TV,” Kaline added as Brock worked the room. “I considered people lucky to be in the Series. I knew I’d get into the Series some day, maybe as a pinch hitter.

“I never expected to have this good a Series. I was one of the lucky ones.”

Kaline batted .379 in the World Series after missing most of the season with his broken wrist. He had 11 hits, two doubles and two home runs.

In a rearview now, the 1968 World Series featured a duel between Al Kaline and Lou Brock.

Kaline won it. Brock, such a beautiful ballplayer and man, was gracious in his visit to the Tigers’ clubhouse in the aftermath.

And now they are joined!